The net impact was typically a 3% to 4% increase in the price of a rooftop solar system immediately after the tariff was imposed. See more details in the analysis below. 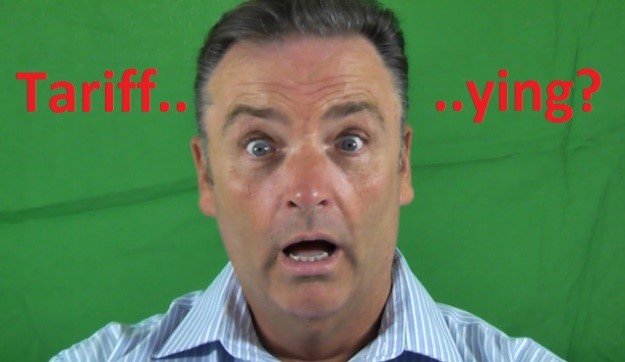 In April 2017, Suniva, a maker of solar panels headquartered in Atlanta, Georgia, filed a complaint with the United States International Trade Commission (ITC, not to be confused with the other solar ITC, the 30% federal Investment Tax Credit which most solar projects are entitled to), citing competition from panels manufactured outside the US. The complaint was based on Sections 201 and 202 of the 1974 Trade act, and has become known as the Section 201 petition. Suniva presented a list of American solar panel manufacturers that had failed and in fact Suniva had filed for bankruptcy a week earlier. Suniva began in the US, but Chinese company Shunfeng International Clean Energy Ltd. bought a majority ownership in 2015.

In May, SolarWorld Americas, a wholly owned subsidiary of German SolarWorld, headquartered and with a large solar panel cell manufacturing plant in Hillsboro, Oregon, joined Suniva in requesting a tariff. In October, First Solar, headquartered in Tempe, Arizona, joined the case. Suniva and SolarWorld manufacture crystalline silicon (c-Si) solar panels, by far the most common panels used for rooftop solar. FirstSolar does not make c-Si panels and while it does have one US manufacturing plant, most of its panels are made in Malaysia or Vietnam.

Most solar industry participants opposed the petition. From an article in PV Magazine: “An extensive and diverse group of activists have banded together to form the Energy Trade Action Coalition and vow to lobby Congress, President Trump and the U.S. International Trade Commission to derail the petition.” A major solar trade group, the Solar Energy Industries Association (SEIA) said the higher cost of solar caused by the tariff will cost about 23,000 solar jobs.

However, in September, the US ITC ruled unanimously that imports of solar panels had harmed domestic manufacturers, and sent its recommendations to the Trump administration. Section 201 petitioners requested specific remedies, the US ITC recommendations included other specific remedies, however, it was up to the Trump administration to announce the actual implementation. On January 22, 2018, the decision was announced to apply a 30% tariff to imported crystalline Silicon panels, to start on Feb. 7, 2018.

The 30% tariff will step down after one year to 25%, after two years to 20%, after three years to 15%, and will expire in 2022. While the Trump administration indicated that panels from China had been “artificially low-priced,” the specifics of the determination from the US Trade Representative included only that China had made renewable energy one of seven strategic industries, and had therefore provided subsidies and financing to its solar companies.

Several complaints have been made to the World Trade Organization regarding the solar tariff, and several countries are pursing legal means to respond to the tariff. We’ll see how these efforts turn out but for now, the tariff is in effect, so what is the impact?

The first thing to note is that the tariff is on solar panels, not on the complete system. Panels have come down dramatically in price over the years and no longer form the majority of the cost of a rooftop solar system. (Panels are a much higher percentage of “utility-scale” solar, than of residential-scale solar.) Panel prices depend on the brand and how efficient they are, however, they are often about 25% of the total installed system cost. This immediately turns the 30% tariff penalty into a quarter of that, a 7 or 8% impact.

In addition, there’s a subtler factor. Because the petition was begun long before the tariff was announced, many manufacturers increased their prices to meet the increased demand from project developers and others who wanted to stock up on panels before the tariff came into effect. Now that the tariff specifics are known and in place, that pre-tariff demand is no longer there. What had been a 10% or 20% rise in prices pre-tariff, became a net 20% or net 10% rise, respectively, post-tariff.

Combine these two effects, and the net impact is typically a 3% to 4% increase in the total installed cost of a rooftop solar system immediately after the tariff was imposed. Systems and situations vary so this is just a guideline.

The tariff may have a bigger impact on non-residential solar in California, or for all solar in states with less sun or lower electricity prices than we have. For California residential solar, fortunately, it’s more of an annoyance than a showstopper.

As a reminder, the federal Investment Tax Credit of 30% for solar – does apply to the entire solar system, and is fully in effect through the end of 2019.

Net Metering – How Utilities Pay You For Your Solar Energy

Net metering is a billing mechanism that credits solar energy system owners for the electricity they add to the grid” according to the Solar Energy Industries Association (SEIA). Net Metering is short for Net Energy Metering (NEM). NEM basics: During the day, your solar system generates energy. When you’re away, most of your solar energy

Heating and cooling your house is one of those things you don’t think much about until the temperature starts to dip in the winter months or peak in the summer months.