After installing solar and converting most of their appliances and vehicle to electricity, the Evans family generates a small net surplus of electricity annually and their natural gas usage is close to zero. 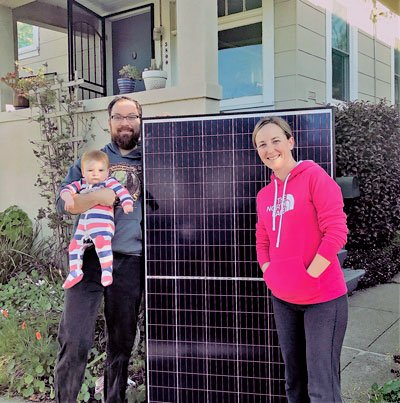 2018 was a big year for the Evans household. The addition of a new baby meant that their energy needs had changed and it was a great opportunity to go solar. With help from SunWork they installed a twelve panel 3.42 kilowatt photovoltaic system and were able to help kick the fossil fuel habit by switching many of their home and transportation needs to electric.

They learned about SunWork from coverage in the East Bay Times celebrating SunWork’s 500th rooftop solar installation. SunWork’s unique model as a nonprofit organization focused on teaching volunteers about the solar energy revolution was a real selling point. Evans works at the nonprofit Center for Biological Diversity which is focused on protecting wildlife from pollution. He was excited to partner with another mission-driven organization dedicated to reducing pollution from fossil fuel energy. SunWork’s nonprofit, volunteer-focused model also meant it was able to install a system for less than other companies.

As part of their home energy system upgrade, the Evans family was able to ditch an inefficient natural gas floor furnace and hot water heater. Instead they installed an electric heat pump, with a ducted forced air system, to keep their house air conditioned year round. They also installed a tanked electric hot water heater. An untimely demise of their car also meant they switched to a plug-in hybrid. The 20-mile electric range of the plug-in hybrid allows the family to carpool to work and daycare powered only on electricity without relying on the gas engine.

After the first year of the solar installation, they generated a net surplus electricity, helping add distributed solar energy to the grid, and their natural gas usage is close to zero. SunWork founder Reuben Veek helped them design a system that maximized their rooftop capacity and plan for the successful transition from gas to electric in their household. “Thanks Reuben and the SunWork team,” said Evans. “We’re excited about raising the next generation in a carbon-friendly household.” 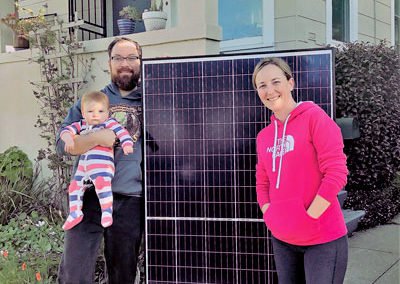 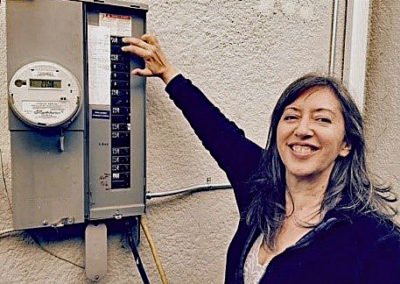 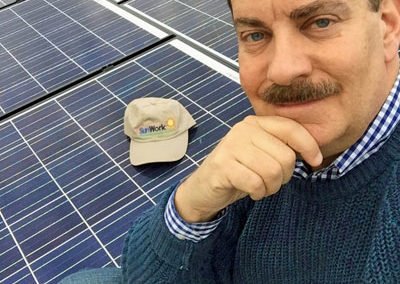 Rosana recently received her PG&E “True-Up” bill, which each solar customer receives once per year for any charges for energy drawn from the grid. Her total bill for the year after the monthly PG&E minimum usage fee: 5 cents! 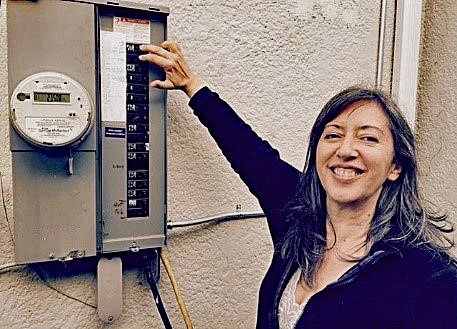 Rosana writes for PV Solar Report. She learned of SunWork through RE-volv, SunWork’s funding partner for several nonprofit installations. Since then she has helped publicize SunWork through blog articles and several local neighborhood groups.

Based on her energy usage, and additional solar for a possible electric car or heat pump, SunWork installed a 3.36 kilowatt (kW) system consisting of twelve 280-watt panels. Rosana wanted shade resistance and per-panel monitoring, so SunWork installed Enphase microinverters and monitoring. She recently received her PG&E “True-Up” bill, which each solar customer receives once per year for any charges for energy drawn from the grid. Her total bill for the year after the monthly PG&E minimum usage fee: 5 cents!

Rosana, thanks for being part of the solar community. 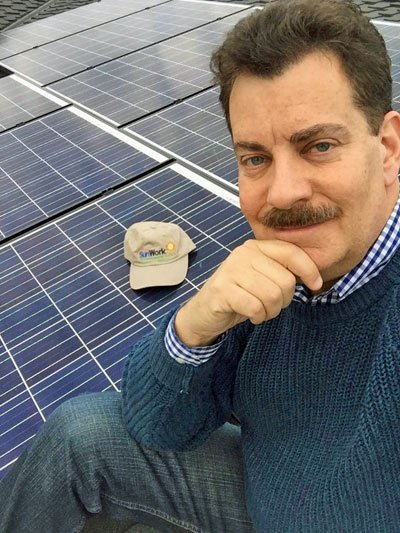 As far back as 2010, Marshall Gingold had been considering solar as an option for his Sunnyvale home, but was deterred by the high costs and long payback periods he was quoted by solar installers. He had invested in various efficiency measures for his home and used less than $100 of electricity per month, making the economics of solar more challenging.

In 2014, however, Marshall learned about SunWork through a neighbor and received a quote for a system with a payback of less than seven years. This convinced him to move ahead with the installation of a 14-panel, 3.5 kW system. Since the fall of 2014, the system has been saving Marshall more than $1,000 per year and he notes that “to date, we have generated over 13,000 kWh and avoided over 10 tons of CO2 in the process.”

Marshall has been so enthusiastic about solar energy that he has volunteered with both SunWork and Sunnyvale’s city-wide “Energize Sunnyvale” campaign, using his marketing talents to help spread the word about the potential for solar.

Marshall chose a rooftop system with a central inverter that has a “Secure Power Supply” feature. This lets him avoid the typical problem of not being able to generate usable power when the utility grid isn’t operating. He notes that “as long as the sun is shining, I can power up to 1,500 W of devices from my PV system even if the PG&E grid is entirely down. This would come in handy during a long outage after an earthquake, so I can power cell phones, computers, heaters, and other appliances.”

Since he has an electric vehicle, Marshall takes advantage of PG&E’s EV Rate for his electricity, which is a great deal for those with solar. It allows him to be paid $.44 for the kWhs he puts onto the PG&E grid during summertime peak periods and pay only $.11 for the kWhs that he uses at night to charge his vehicle.

There are no upcoming events.